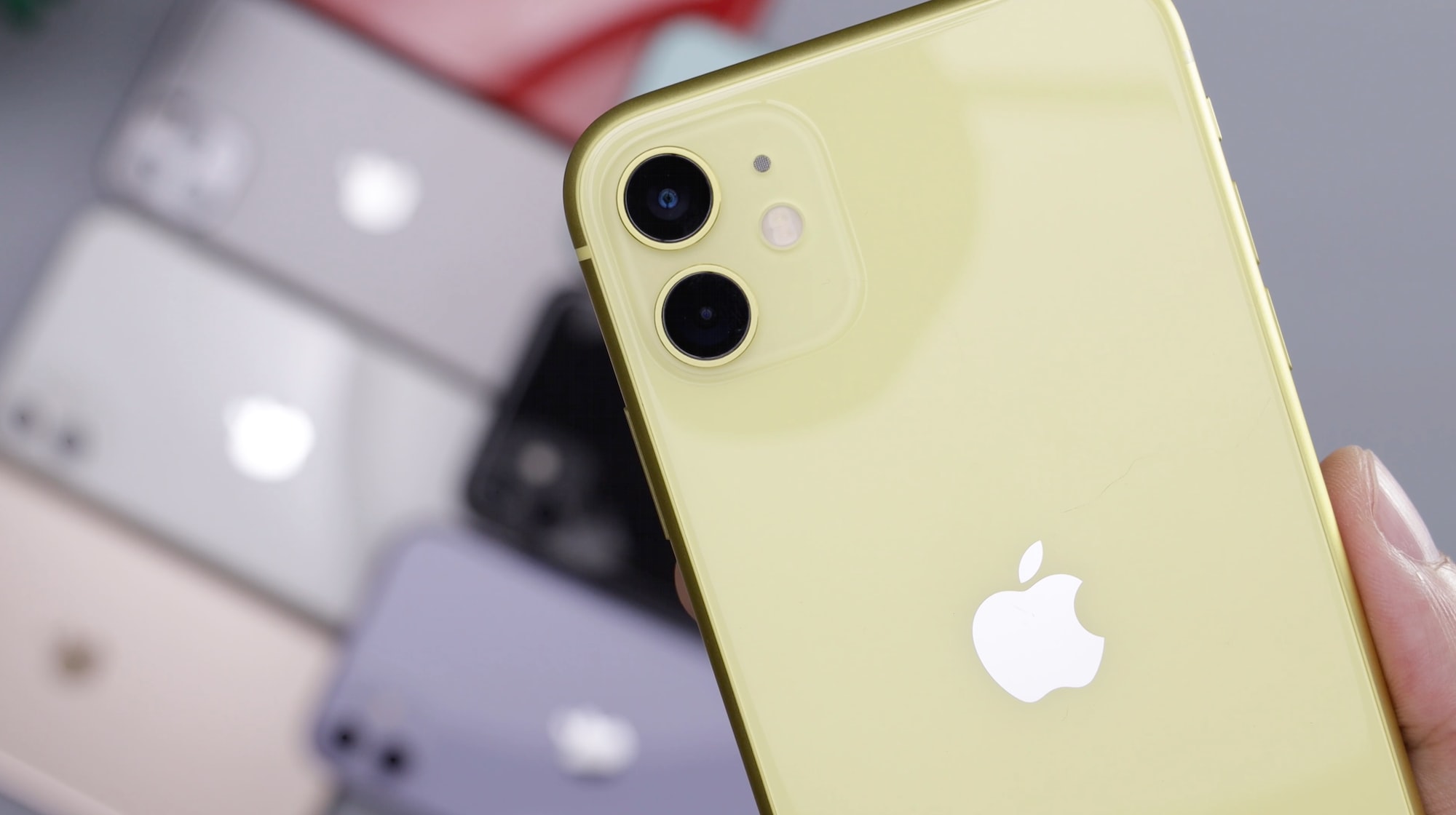 As it's the holiday season now (at the time of publishing), let's put away the programming-related stuff (this blog's main focus) and talk about something different - like tech, for example. Today, I'd like to share with you my experiences of using the iPhone 11 - Apple's latest "affordable" smartphone and my daily driver for almost three months now. We'll go over its features and talk about how it feels in day-to-day use. Mind you that I'm a long-time Android user - a casual one for that matter, who doesn't change his device every week or so. Anyway, I hope you'll enjoy this unique perspective and the "review" as a whole. Let's get into it!

Everyone knows how important the first impressions are. iPhones, if not all of Apple's products, straight up nail the unboxing experience. You can say about them many things, but one is for sure - they're experts at marketing and unboxing experience too. On the front of the box, you see the back of your new iPhone, which by the way, is the same size as the actual device. The process of unboxing is very pleasing. The only thing that might be slightly problematic is the protective foil on the box itself. Every other step is just touching, peeling, etc. - very comfortable. I didn't have the same experience with any of my two previous Android phones, but I didn't pay much attention to it back then.

So, a bit about the phone itself. It feels good and premium at hand. Maybe it's because of its overall design or the noticeable weight.

On the back, you've got a slab of glass and a camera bump. It sticks out a little, but with a case on, there's no problem with that. It houses two fairly big camera lenses. They're both placed on frosted glass, which overall looks pretty nice.

Around the edges, you've got some aluminum framing, which isn't as impressive as the stainless steel from the Pro models, but still looks good. At the bottom of it, there's a place for the lightning port and two speaker grills, although only one of them generates actual sound.

Finally, on the front, you've got your rounded and "notched" screen. To be honest, I don't really mind it. Users who upgrade from older iPhones (up to 8) or "bezeled" Android phones will most likely appreciate the screen. However, the black borders around it (only slightly thicker than in Pro models) don't look equally good. But I enjoy the fact that they're evenly sized on each edge. By the way,  they look better with a case on.

What about the screen? It was probably the most controversial aspect of this phone's direct predecessor - the iPhone XR. This year - there's no change at all. The problem, I remind you, was that the LCD display has a resolution below 1080p and only slightly above 720p, which doesn't feel right for such a device. But, the reality is, unless you really try to, you won't see a difference between this and 1080p display. My previous Android phone had LCD 1080p, and yet it still didn't look as good as the iPhone's. Maybe that's why the complaints about the resolution have recently stopped (or at least slowed down). Good contrast, decent brightness, and the overall high-quality are very much present. So, unless you're coming from mid- to high-end OLED, you'll most likely enjoy that screen as much as I do.

Unlike Pros, the basic iPhone 11 comes with only two rear cameras, but oh boy, aren't they great! I might be a bit opinionated here because I only interacted with cameras from three other, not that high-end phones, but it doesn't change the fact that it's an excellent camera! Images look beautiful, with life-like colors. Also, the process of taking them feels fast and smooth, with almost real-time processing.

The bokeh effect is also impressive, although it's the quality of the videos that I'm most amused by. It's mostly because of the described quality, as well as the exceptional image stabilization. Even drastic movements are smoothed out nicely. The microphone also records great audio, comparable to good USB microphones.

As for the front-facing camera - it's okay, but nothing mind-blowing here. Don't get me wrong - the quality is still excellent, it's just that I simply don't use it very often. Sure, you can take your selfies, slofies, and memojis, but I'm not really into that sort of stuff. All I mostly use this camera for (and a lot of other included sensors) is Face ID. And yes, it's pretty reliable and fast, so no problems here.

I usually don't use my phone very often, maybe only for special occasions like trips or events. That's why my battery experience might drastically differ from yours. On average, I use my phone for a bit over two hours a day, which gives me about 3-5 days on a single charge, depending on the used apps. But I hardly-ever allow the battery to drop below 50% before plugging the phone in or dropping it on a charging pad.

The included 5W charge brick feels a bit like a joke to me. It usually takes me over an hour to charge my phone to full capacity, but it can take up to 4 hours if you're going from closer to 0%. So, I highly recommend getting a better charge brick (the phone supports up to 18W) or a wireless charging pad to charge the phone more frequently.

Now, here comes the part that's worth talking about - the iOS 13. Of course, raw-performance-wise, the latest iPhones are still on the top. Based on the most recent reports, they even surpass Qualcomm's top chip for 2020 - Snapdragon 865. But we all know that there's a lot more to using a phone than sheer performance...

So, the OS - iOS - differs from Android in a few key aspects. I knew that by picking the iPhone, I'd have to adjust to a different ecosystem, so I can't complain too much. Yet still, with that said, iOS is pretty nice, but far from ideal.

If you're considering buying a new iPhone, you've most likely heard of the buggy iOS 13 upgrade. I've experienced a few of these bugs myself. For example, sometimes, the app exited unexpectedly or didn't want to open at all - simple stuff. But the other two of the bugs were really concerning:

So yes, iOS 13 is quite a buggy of a release. Apple is well-known for supporting its devices for long periods of time. However, this doesn't have anything to do with the existing bugs. It just assures me that everything will be fixed and improved with time.

What else can I say about the iOS? Well, sure enough, you don't have much customizability options available, other than moving stuff and changing the background. It doesn't sound too good, but looking from the bright side - at least you won't feel the need to search for this one ideal launcher or icon pack for your phone. ;) Also, the whole OS uses a different, flat-design-inspired look with rounded edges pretty much everywhere. For me, it looks good.

For many, iPhone and iOS serve as an entry into Apple's ecosystem. Sadly, the first steps inside of it might be a bit unpleasant. But before we get to that, a word on something that's still nice - the App Store.

You might have heard opinions that iOS apps are of higher quality than the Android ones. From my experience, I'd say they're equal. iOS has some better, more optimized apps, but also some that are worse. It's all really dependent on the developers, so you can't put the blame on Apple. What is true, though, is that there are fewer apps available on the App Store than there are on Google's Play Store (mostly because of the OS market share). That's especially important, considering that you cannot install apps from any other sources like on Android. In my case, every app I used on my previous phone was also available here, so I didn't have any problems with that.

Aside from the App Store, my experiences with Apple's ecosystem weren't that great. Getting started with the iCloud was a mess. I didn't know what's stored on my device and what's on the iCloud. It was really annoying, especially when trying to move some photos and videos from the iPhone to the computer. A simple cable wasn't enough - I had to go for iTunes, which, on the other hand, aren't available on Linux (my primary OS), so I had to go for Windows. Only after all that I realized the photos and videos I was looking for were stored on iCloud. Maybe it's just me and my lack of experience with Apple products, but it doesn't matter. Of course, if you've got a Mac - good for you - everything should feel seamless.

Now, I'd like to mention a bit about the work side of things. As a web developer (its this blog's main topic after all), I often use my mobile devices to test different projects. On Android, everything was OK, but here, even simple website debugging isn't possible! You must have a Mac for any of such use-cases. Also, every browser on iOS must be built with the same engine as Safari, so you cannot test different browsers engines on the same device (like on Android). Well, at least you've got Safari, I guess...

Overall, I'm happy with this phone. There were some iOS-related problems at the start, but now they're gone, or I've learned to live with them. There're also some nice things that aren't available on most Android phones, like Face ID or mute switch.

Now, I won't go as far as to recommend you to buy it. It heavily depends on how you are, what your needs are, and what's your budget. Even though Apple dropped the price to $699, in some countries (because of the import tariffs and taxes), the basic iPhone 11 can still cost around $1000. Also, not everybody has to like Apple's ecosystem. I went for the iPhone because I was interested in how it feels and what it's like. Now I can say that it's a great phone, with only a few drawbacks.

So, what do you think about the iPhone 11? Do you have or are you planning on getting one? I'd also love to hear your opinions about such "review" kind-of posts, as they're somewhat new to the blog. Do you like them and would like to see more of them? If so, consider sharing this piece and following me on Twitter, Facebook, Reddit, or through my weekly newsletter. If you're interested, I've also got a YouTube channel about web development, so feel free to check it out! Have a nice day!